Honored by A Loving Family

SHOTTSIE was a beautiful Alaskan Husky/German Shepherd dog. When my daughter was about 10, she said she would like a big dog. We looked in the newspaper and found an Alaskan Husky/German Shepherd mix, one-year old male dog who needed a new home, so we adopted him, made up our minds we would be very loving with him and make him a good home.
His name was Buddy, but my daughter wanted a different name, so we called a friend, who is a German citizen, and asked if there was a German word that meant "buddy" or "friend." She said Shottsie meant sweetheart in German, so that is what we named him. We remember our, "gentle giant," very fondly. He got along with other dogs and never chased the cats, and he loved to go on long walks. We had him for 11 years and my daughter loved having a big dog. He didn't bark, but being a typical husky, he loved to howl.
One morning when he was 11 years old, he died suddenly and the vet determined poor Shottsie had died of a heart attack. We have his ashes in a pretty urn in the sunroom, yet. He was a truly lovable dog. 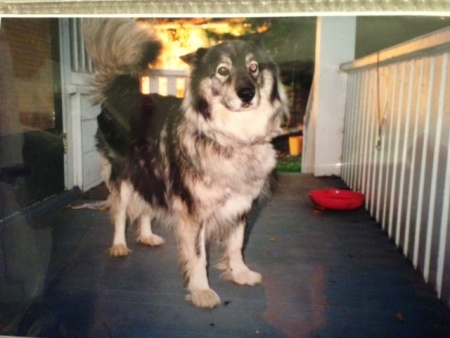